The Arduino and initial components for prototyping have been purchased and assembled. The prototype circuit for an upcoming 16-segment scanning backlight is currently being tested with simple LED’s (LED ribbons will be used instead in the near future). 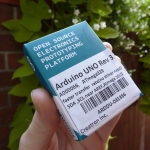 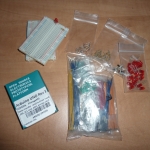 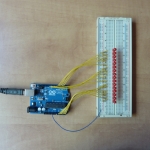 Arduino tests today have shown that very accurate 1/10,000th second strobes (per segment) can be accomplished. LED’s can switch in less than one microsecond.

Currently, the limiting factor is the amount of brightness that can be squeezed into a scanning backlight behind an LCD panel. Short periods of illumination for each segment results in a dimmer image. Extra backlight brightness is needed in order to compensate for the long dark periods between strobes (at 1 strobe per segment per LCD refresh). The design goal is at least 90% motion-blur reduction (suitable for games and computer, insignificant input lag) without using motion interpolation. This requires LED’s to be dark 90% of the time. As a result, the backlight needs to be 10 times brighter during the illumination, just to compensate for the short illumination strobe!

New posts added in threads at AVSFORUM, overclock.net, and hardforum.com.