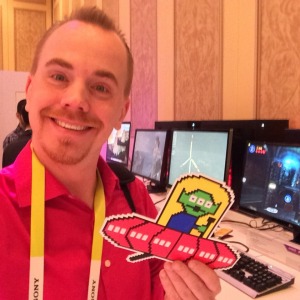 Behind the UFO, Blur Busters founder Mark Rejhon is a display researcher who has worked in the home theater industry at various times in the past, including Stewart Filmscreen, AVSCIENCE Forum, Key Digital, TAW, and several other companies. He was also the moderator of the Home Theater Computer Forum at AVSFORUM from 1999 through 2001.

He is the creator of Blur Busters as well as TestUFO Motion Tests. He also has industry standards writing experience (XEP-0301) and a peer reviewed conference paper (display pursuit camera technique).

He also has invented several display testing techniques, including a low-cost pursuit camera now in use by multiple display reviewer websites and also cited by NVIDIA and others in scientific papers using the 100% web-based motion testing website, TestUFO.

For reducing motion blur on displays, Mark has researched the use of display-based strobe & scanning backlights, which is essentially a real-time technology. Mark Rejhon has extensive experience in many other real-time technologies including real-time text (www.realjabber.org), real-time stock trading software, and video processing and deinterlacing algorithms. In 2000, he invented the world’s first open-source 3:2 deinterlacing algorithm, for dScaler. Other relevant video-related experience, include work with raster scan-line interrupts in 6502 machine language creating a video game for the Commodore 64, work on the HOLO3DGRAPH PCI video processor card with a Faroudja video processor chip, and work with CRT projector calibration in the past.

Special thanks to Alain Bureau for his support of the operations of Blur Busters! (LinkedIn)