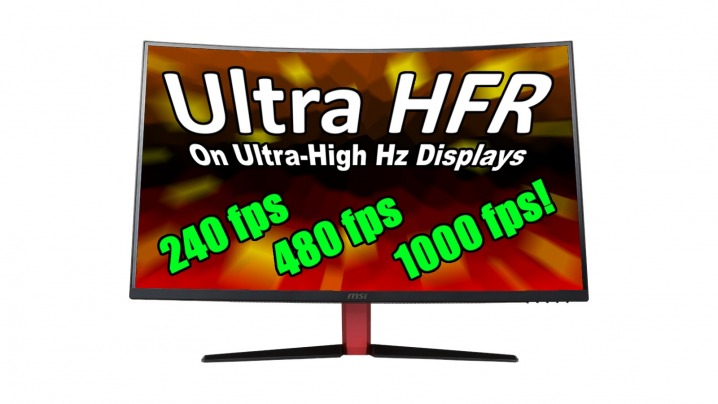 Ever since the Blur Busters Holiday Special article about the Amazing Journey to 1000Hz Displays and the earlier true 480Hz monitor tests, Blur Busters has been paying much more attention to HFR video developments.

We are the only website in the world to exclusively talk about “Better Than 60Hz”. This universe also includes 120fps HFR. However, there are also experiments with Ultra HFR — the art of displaying video at ultra high frame rates (HFR 240fps, 480fps and 1000fps) in real-time on ultra high refresh rate displays. Not slow motion!

Now, we are testing video beyond 120 frames per second!

Here is a method of creating 240 frame per second HFR video, for play back on today’s 240 Hz eSports monitor.

High speed cameras, designed for slo-mo, often do not record audio well. At the moment, the best way to add audio is to record the audio separately, and use a command line utility to dub the audio onto the sped-up file.

In the newly created Blur Busters HFR Forum, there is a thread worth reading about Ultra HFR.

Experimental 1000 Hz displays are already available, and will eventually be cheap within one human generation. Now even some smartphones are also gaining ultra-high frame rate video recording capabilities too. This presents opportunities for cheap Ultra HFR in the coming years!

Today, modern displays are sample-and-hold, for ergonomic flicker-free reasons, which creates a Hz bottleneck. No CRT flicker, but far more motion blur than a CRT tube.

To reduce camera-side motion blur massively, a content creator can use a fast sports shutter 1/1000sec on the camera. But this will always be bottlenecked by destination display blur, from the sample-and-hold effect.

To eliminate all motion blur weak links, both source shutter (1/1000sec) and display persistence (1ms MPRT) should be fast. There are two ways to reduce display motion blur:

The problem with approach (1) is you can produce stroboscopic stepping effects (phantom arrays) for fast-camera-shutter material such as sports, see The Stroboscopic Effect of Finite Frame Rate Displays. Besides, real life doesn’t flicker or strobe, so impulsing is a humankind band-aid for simulating reality.

Solving motion blur and stroboscopic effect simultaneously requires ultra high frame rates: 1000fps at 1000Hz! One can do a 360-degree camera shutter blurlessly. A full-open shutter is only 1 millisecond during 1000fps video. A 1000Hz display is blurless sample-and-hold via sheer brute Hz.

This makes video look closer to real life, closer to a Holodeck — with no framerate-induced limitations like forced motionblur or forced stroboscopic effects. This can make 1000fps UltraHFR less nauseating than 120fps HFR.

Diminishing Curve: Next Step After 120fps HFR should be 1000fps UltraHFR

As a result, a large jump up the diminishing curve of returns is required to get as dramatic improvement as the jump between 60fps and 120fps HFR.  Therefore we believe that the next step after 120fps HFR should now be 1000fps HFR.

When trying to force a display to go maximum motion clarity, there are some best practices.

In the world of experiments with 240fps, 480fps and 1000fps real-time video playback on ultra-high Hz displays, these are very important considerations from recent research:

Research indicates that any one of the above can be a weak link in eliminating the benefits of UltraHFR video, and one must carefully control the variables to give truly human-visible benefits of UltraHFR. If you are planning any experiments in UltraHFR at maximum frame rates for the best possible Holodeck-league motion clarity, it is very important to know and understand the above variables.

To eliminate all weak links, so that remaining limitations is human-vision based. No camera-based or display-based limitations above and beyond natural human vision/brain limitations.

1000fps UltraHFR gives the director full control of motion blur, too.  1000fps UltraHFR is a huge venn digram capable of embedding the entire range of framerates in humankind.

With such fine granularities on an ultra-high-Hz displays, refresh rates no longer need to be evenly divisible by frame rate, in order to look smooth!

In other words, 24fps video embedded inside a UltraHFR-capable video file, played on a 1000Hz display, looks exactly like a 24Hz display — all with original camera motion blur and persistence blur.

At Blur Busters, we are among the few people in the world to have witnessed Ultra HFR video!

Being the founder of Blur Busters (Mark Rejhon), I used to work with video processor companies (RUNCO, Key Digital, and a PCI card containing a Faroudja chip). I was the author of the world’s first open source 3:2 pulldown deinterlacer algorithm twenty years ago in dScaler (Year 2000, Internet Archive).

We believe this is very useful for many applications in the coming decade, from speciality theatre, virtual reality, amusement park rides, advanced cinema, truly immersive virtual vacations, “Holodeck” video, and other applications once more 1000 Hz displays are commercially available beginning sometime within the next decade and beyond.