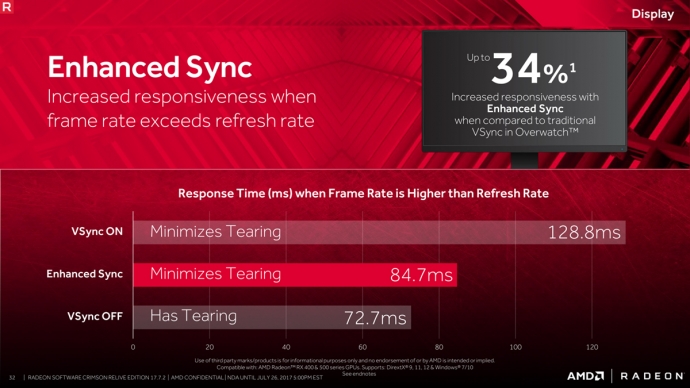 Like Fast Sync, Enhanced Sync appears to be a form of “true” triple buffer V-SYNC, using its third buffer to utilize excess frames above the refresh rate to deliver them faster than traditional double buffer V-SYNC allows. This reduces latency, eliminates tearing artifacts, and avoids the stutter double buffer V-SYNC causes when a frame is forced to repeat due to a fixed frame delivery window being missed.

Unlike Fast Sync, however, Enhanced Sync acts more like Nvidia’s Adaptive VSync whenever the framerate falls below the refresh rate, where it can dynamically disable itself and allow tearing to maintain input responsiveness at lower framerates.

We will be performing our own tests of Enhanced Sync in the future. In the meantime, to get an idea of the method’s upsides, downsides, and the input lag reduction that can be expected, see our G-SYNC 101: Input Lag & Optimal Settings article, where the very similar Fast Sync is covered in detail.

More can also be learned about Enhanced Sync from AMD’s official posting here.