Blur Busters released the high speed video of motion blur reduction in year 2012, and we were the world’s first website to measure the input lag of G-SYNC via high speed camera in 2014.

We now have a new Test UFO test, called TestUFO Scan-Out which automatically rotates between 4 different brightly colored images every refresh cycles. This test pattern is intentionally extremely flickery, for the purpose of maximizing contrast between refresh cycles during super-slow-motion video analysis.

The refreshing behaviour is very similar to a typical laptop, top-to-bottom, with a fuzzy zone representing the LCD pixel response.

Here’s where this diverges interestingly; this iPad scans from top-to-bottom in portrait mode. When filmed in landscape mode, this becomes a sideways scan effect:

Much faster and cleaner pixel transitions than IPS, is the TN LCD. Observe that the pixel response fade is much thinner on a 1ms TN LCD than on a 5ms IPS LCD — the fade zone is roughly one-fifth the height.

And for a really clean refresh cycle, here’s a high speed video of an OLED, provided by Edward on Twitter. The incredibly fast pixel response of an OLED means the fade zone is extremely tight in comparison to any LCD:

Not All Pixels On Displays Refresh Simultaneously

As seen in these high speed videos, displays often refresh sequentially, in a top-to-bottom fashion.

There can be a latency differential for top edge and bottom edge, which can get rather significant in some sync modes (VSYNC ON) at lower refresh rates. The refreshing sequence is illustrated temporally in this scan graph: 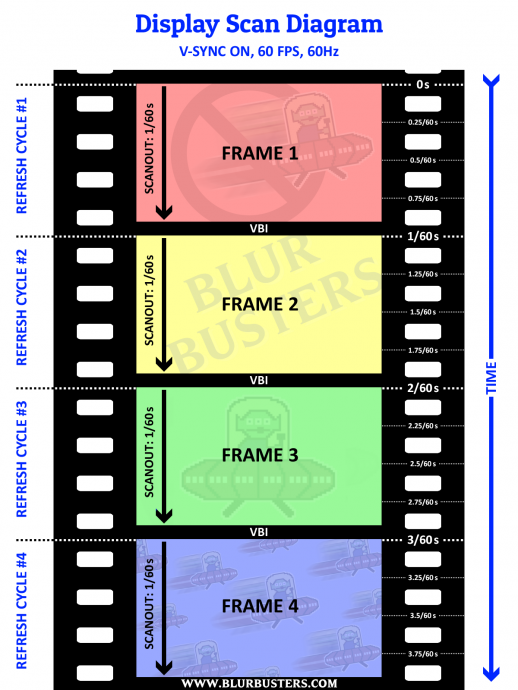 It is worth noting that refresh cycles cannot be transmitted instantly all at once on a cable.

Pixels are transmitted one pixel row at a time over a cable. This is because GPUs have to serialize two-dimensional refresh cycles over a one-dimensional cable. Pixels are output one pixel at a time, left-to-right, top-to-bottom.

Panel refreshing may be a different pattern, different direction, or different velocity, and may be totally different (e.g. DLP) from the cable sequence. However, most high end eSports gaming monitors are now able to real-time synchronize panel refresh to cable delivery sequence with only line buffer processing rather than full frame buffer processing. This is much much like an old CRT tube, except done flickerfree in a sample-and-hold fashion, and this reduces input lag to the absolute minimum possible.

This is classic raster-based scanning on the cable, the refresh cycle direction of top-to-bottom has remained identical for nearly 100 years all the way from 1930s television broadcasts through 2020s DisplayPort and HDMI 2.1 cables, even with variable refresh rates!

Sub-Refresh-Cycle Latencies Are Possible With VSYNC OFF

At frame rates exceeding refresh rate using VSYNC OFF, latencies of less than a refresh cycle are possible even for screen bottom edge. Here is a scan graph at 180 frames per second at 60 Hz, generating 3 tear lines per refresh cycle: 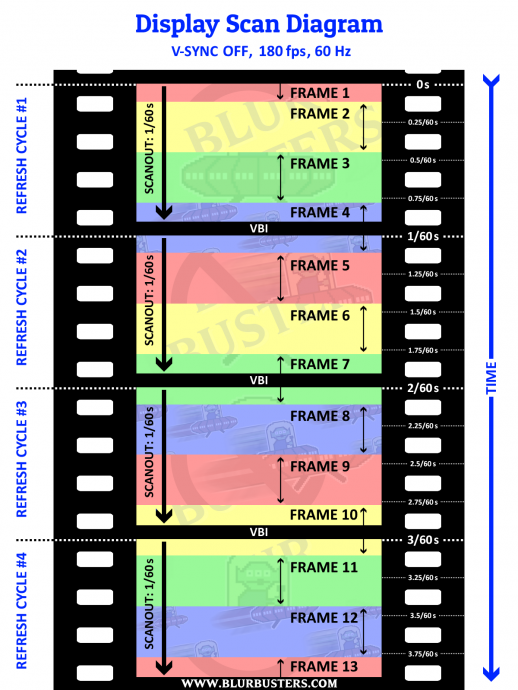 Running at a frame rate three times the refresh rate, will result in 3 tear lines per refresh cycle, although some tearlines may end up hidden in the interval (VBI) between refresh cycles.

In this example, each frame slice is 1/3rd refresh cycle latency, and the updated frame (slice) is metaphorically spliced in realtime at the display output’s current scan-out position.

There are advantages of framerates above refresh rates including lower input lag — which can end up being less than a refresh cycle even for the screen bottom edge. This is why paid professional eSports players often prefer VSYNC OFF.

The top-to-bottom raster scan stays at a fixed velocity because the horizontal scan rate is unchanged for VRR (number of pixel rows per second). However the intervals between refreshes can vary instead of being a fixed interval. Here is the scan diagram of 100fps at 144Hz: 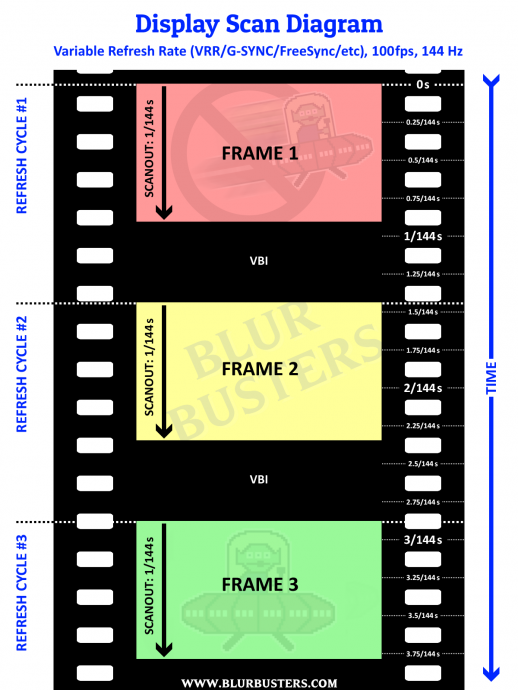 In this asynchronous-refreshing situation, the monitor actually waits for the computer to begin transmitting the new refresh cycle over the cable.

When a video game is finished rendering a new frame and presents it to the GPU video output, the GPU output essentially immediately begins transmitting instead of waiting for the next fixed refresh interval. The monitor immediately begins the new refresh cycle right on the spot.

Another huge benefit of variable refresh rate is very low scan-out lag. A 240Hz G-SYNC monitor can display a 30Hz refresh cycle in 1/240sec, refreshed near real-time off the video cable. This is a “Quick Frame Transport” (QFT) behavior of VRR.

Display scan-out research has become much easier with the advent of inexpensive high speed cameras.  Reviewers and manufacturers are now strongly encouraged to purchase high speed cameras to analyze scan-out latency of their displays, and troubleshoot problems caused by:

Some of these only records 1000fps for only a fraction of a second, however this is plenty for refresh behavior analysis and debugging latency engineering problems in gaming monitors.