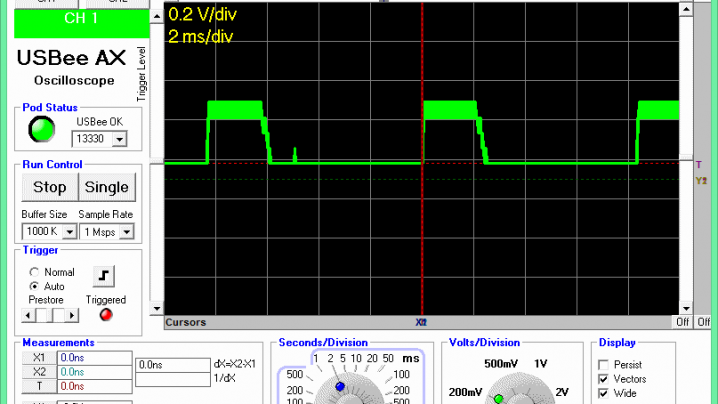 My USBee compatible oscilloscope has arrived!  I did photodiode tests on an impulse-driven LCD computer monitor with a LightBoost strobe backlight at 120Hz refresh. When LightBoost is enabled, the ASUS VG278H computer monitor backlight strobes once every refresh, at 2ms per refresh. The backlight LED’s appear to be fully illuminated for 2.0ms, with a ramp-down of about 0.4ms (caused by LED phosphor decay).

The BENQ XL2411T (1ms) computer monitor is reported to use 1ms strobes for LightBoost. This would result in 94% less motion blur than LCD 60Hz. A comparison will be published early next year.

UPDATE: There’s a way to shorten the backlight strobes for even clearer fast motion! Go into your monitor menus, and adjust the LightBoost OSD downwards, towards 10%.  Using a lower setting shortens the strobes to as short as 1.4ms!  Don’t use the LightBoost “OFF” setting however.  The picture becomes dimmer at lower settings, so choose a compromise setting. More information in the LightBoost HOWTO.