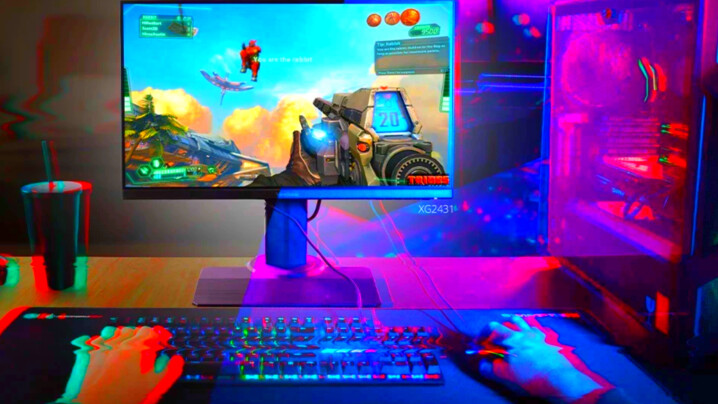 Today, on Black Friday 2021, lots of items are on sale now at Amazon, including multiple gaming monitors

What makes this Black Friday particularly special for Blur Busters is that ViewSonic XG2431 gaming monitors are currently in stock on Amazon USA for under $300.

It can do any CRT-motion-clarity refresh rate in 0.001Hz increments from ~59 Hz through ~241 Hz, and even supports Quick Frame Transport (QFT) tweaks. This allows some refresh rates to gain perfect zero-crosstalk operation with lower-lag-than-factory strobing completely free of double image effects. With a truly multisync strobe, you are not stuck to presets like only 120Hz. End-user strobe tuning is now easier than using a colorimeter via an easy step-by-step guide.

The same electronics parts shortages that impacted GPU manufacturing and car manufacturing, also impacted the 23.8″ Innolux panels inside ViewSonic XG2431 monitors. The panels and the special chips used by them (scaler/TCON) were hit extremely hard by semiconductor fabrication shortages, as well as the pandemic. To put salt in wounds, there were container ship shipping problems worldwide.

This impacted the ability to accelerate shipping of Blur Busters Apprroved 2.0, until Amazon USA got a large container shipment on time for Black Friday. Currently, monitor is not yet available in Europe. However, you can still order overseas shipping from Amazon USA if you’re looking for the most CRT-like LCD motion blur reduction modes.

I received mine and I have spent all afternoon and evening with it. I love it. It’s an exceptional monitor. I’ll share more specific impressions later after I test out more features and have time to write it all up.

Just received it yesterday! (like two days after it changed to status pending) I’m really enjoying it so far.
[…] I’m very happy with my purchase and it was worth the wait/hassle IMO

Further impressions… I’m still loving this monitor. I can safely say that it is the best monitor I’ve ever owned. The motion quality is exceptional and very customizable. As others have reported, 60Hz up through about 120Hz is perceptually crosstalk free while using large vertical totals. Which is amazing. CRT motion-clarity without noticeable artifacts is finally here!