“I’m a definite convert now. Downgrading in resolution [from 1440p] hasn’t been a problem. In areas where I can maintain 120Hz, Lightboost makes a huge difference. It truly is like gaming on a CRT again. I really can’t wait till we start seeing IPS panels that take advantage of frame matched backlight strobing.”

“Please look at my bf3stats history graph of kdr page: 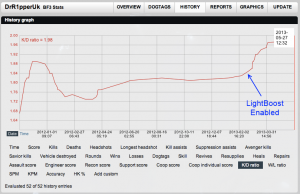 “I would like to bring your attention to the sudden increase in my average (i.e. running) KDR that started towards the end of february, the exact time i bought a ASUS 2ms 120hz monitor with light boost (upgraded from a Hannspree 5.5ms 60hz monitor). Please ignore the wild peaks and troughs at the beginning of this graph, this was a period of first learning to play that game well and then the updates that came along to stop the weapons having as much power and accuracy (making it tougher to kill as many people in a single clip hence i died more). After the first 9 months of game updates the game finally smoothened out with fairly consistent weapons handling and predictability once again. This is represented by the consistently stable kdr throughout the long middle period of the graph.”

“So, I’ve had my VG248QE for about a week now. I came from the VG236H and prior to that I was on the FW900. When my FW900 died, I cried. I replaced it with the VG236H and thought I was doing ok. I enjoyed it for about nine months until I started reading up on lightboost. I can safely say, that in the past week, I’ve enjoyed gaming so much more and I feel like I’m back on my FW900 with the VG248QE. It seriously is as close to CRT as you can get.

Am I seeing this correctly? The last time I gamed on a CRT monitor was back in 2006 before I got my first LCD and this ASUS monitor is EXACTLY like how I remembered gaming on a CRT monitor. I was absolutely shocked and amazed at how clear everything was when moving around. After seeing Lightboost in action, I would have gladly paid twice the amount for something that can reproduce the feeling I got when playing on a CRT. Now I really can’t see myself going back to my 30″ 2560×1600 IPS monitor when gaming. Everything looks so much clearer on the ASUS with Lightboost turned on.”

“Oh my, I just got Skyrim AFK camera spinning (which I used to test LCD’s versus the FW900) to run without stutters and VSYNC locked to 120. This Benq with Lightboost is just as crystal clear if not clearer than the FW900 motion. I am in awe. More testing tomorrow. Any of my doubts about this Lightboost technology have been vaporized! I’ve been playing around with this fluid motion on this monitor for like 6-hours straight, that is how impressive it is.”

“Im running one of those Asus 24″ glossy screens that vega sells combined with a titan gtx and itis amazing. After dialing in the colors I like it better than my sony fw900 and my catleap 2b! This is exactly what i have been waiting years for!” 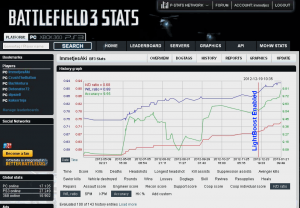 “I also tried the 144Hz/120Hz without lightboost but I like the 120Hz with lightboost better. In game I can tell straight away if lightboost is off or on because of the blur.”

“I bought this monitor to use the LightBoost tweak and let me tell you, if you want CRT like clear motion GET THIS NOW! This is amazing specially for FPS games. Google lightboost zero motion blur or go to blurbusters.com for instruction on how to enable the tweak on this monitor.”

“I’m a very old school gamer and was a big proponent of high refresh rate CRT gaming back in the day. I finally broke down and picked up a 24” Asus monitor last night and gamed till very late. Simply amazing, it brought me right back to the old days. The light boost at 120hz was night and day for me over the non-lightboost 144hz.

Being a photographer and using IPS panels for a few years, going back to a TN does suck but my calibrated Dell will just have to sit to the side now because I won’t be gaming without light boost again! “

Another testimonial guys. This REALLY works.. This has changed my life.. The last CRT I owned was a 19 inch view-sonic. One day I decided I was gonna get with the “Jones” and get me an LCD cuz my mate had a BenQ LCD and it was flat and stuff and cool and stuff.. I got a 19″ view-sonic LCD…. My gut dropped when I realized what technology I had stepped into.. The motion blur was horrendous. At the time I was playing Unreal Tournament and I went backwards in game play. I really couldn’t see anything. I was so upset.. As technology progressed over the years speeds of the LCDs have gotten quicker.. The fastest LCD I have owned is my just now superseded Acer GD245HQ 2ms 3d (non-lightboosted) 23.6 inch triple way monitor.. (3 side by side) monitor(s). Up until just yesterday I thought I was at the cutting edge… Surely to get a 1ms monitor cant be worth the money, nor the hassle.. “I’m at the tier” or so I thought. Until reading up on this new light-boost hack , tweak, ABSOLUTE AWESOMENESS that has been discovered. I went out a bought a single ASUS VG278HE monitor to see it for my own eyes. Holy ****.. Is all I can say.. I am once again back to the days of my Unreal Tournament on a 19″monitor but now the luxury of a 27″.. Without a doubt this is the 7th wonder of the world. This find has brought LCDs back into the realm of gaming as we once new it.. Have no fear people. This works on the monitors that have been outlined… You will never look back.. I can now sell my 3 ACER monitors to re-coupe the cost of the ASUS and live happy. So far Ive tested Dirt 3, Battlefield 3, BioShock, Crysis 3 and the gameplay has changed people. It sis so smooth and crisp. You can see everything on the screen, as it moves, and clearly. No blurriness.. Once the blurriness kicks in your brain just switches it off., Have you noticed the latest ad campaign tactics of blurring out the surroundings of the picture that the ad makers don’t want you to concentrate on? Thats what happens in game play.. Now with this light boost set in place you can see everything even if its moving.. Do it.. Do it now… It is awesome.. Now to test M.A.M.E.

This is just a small sampling of hundreds of testimonials of LightBoost elsewhere.
For instructions on enabling LightBoost, see the LightBoost HOWTO.