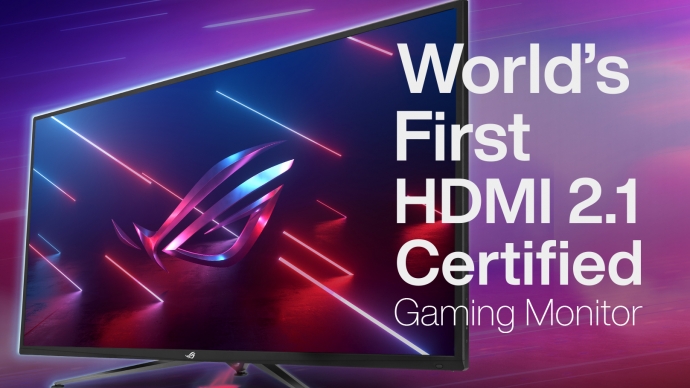 The latest 43-inch ASUS ROG gaming monitor from ASUS has received the HDMI 2.1 certification according to an ASUS press release via VideoCardz. The monitor that is yet to be announced or given a model name, has undergone tests by Allion Labs, making it the first of their 43-inch monitors to be HDMI 2.1 certified.

The new HDMI 2.1 specification for video cables with lots of bandwidth, allows 48 gigabits per second, to permit 8K 60 Hz and 4K 120 Hz at full color gamuts. While the Eve was the first to announce HDMI 2.1 inclusion, ASUS may have an actual monitor on market first.

While it’s pretty obvious that this monitor is set to be compatible with next-gen consoles, it’s supposedly the first monitor to pass the extensive Fixed Rate Link (FRL) tests set by Allion Labs. The monitor delivers up to 48 Gbits of bandwidth for 4K resolution of 3840×2160 with a VRR of up to 120 Hz too.

This 43-inch, along with other HDMI 2.1 compatible monitors should be launching in a similar time frame to the next-gen consoles in the holiday season. They are going to be available in 27-inch, 32-inch and 43-inch variants.