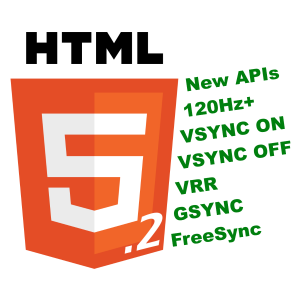 Several years ago, I created TestUFO Motion Tests, the first precision display motion-test website. With this, I began benchmarking web browsers, with the first 120Hz Web Browser Tests, beginning a few years ago.

As of April 2017, I am now an Invited Expert at W3C Web Platform Working Group with a recent accepted modification to HTML 5.2 via a github commit. This is the HTML standard that web browsers aims to comply with.

EDIT June 2017: The new Apple announcement of an iPad with 120Hz and variable refresh rate support now adds extra urgency to standardization this within HTML 5.2 as soon as possible.

This article aims to begin a serious discussion with the industry about further work on “Better Than 60Hz” support within HTML 5.2 and beyond. 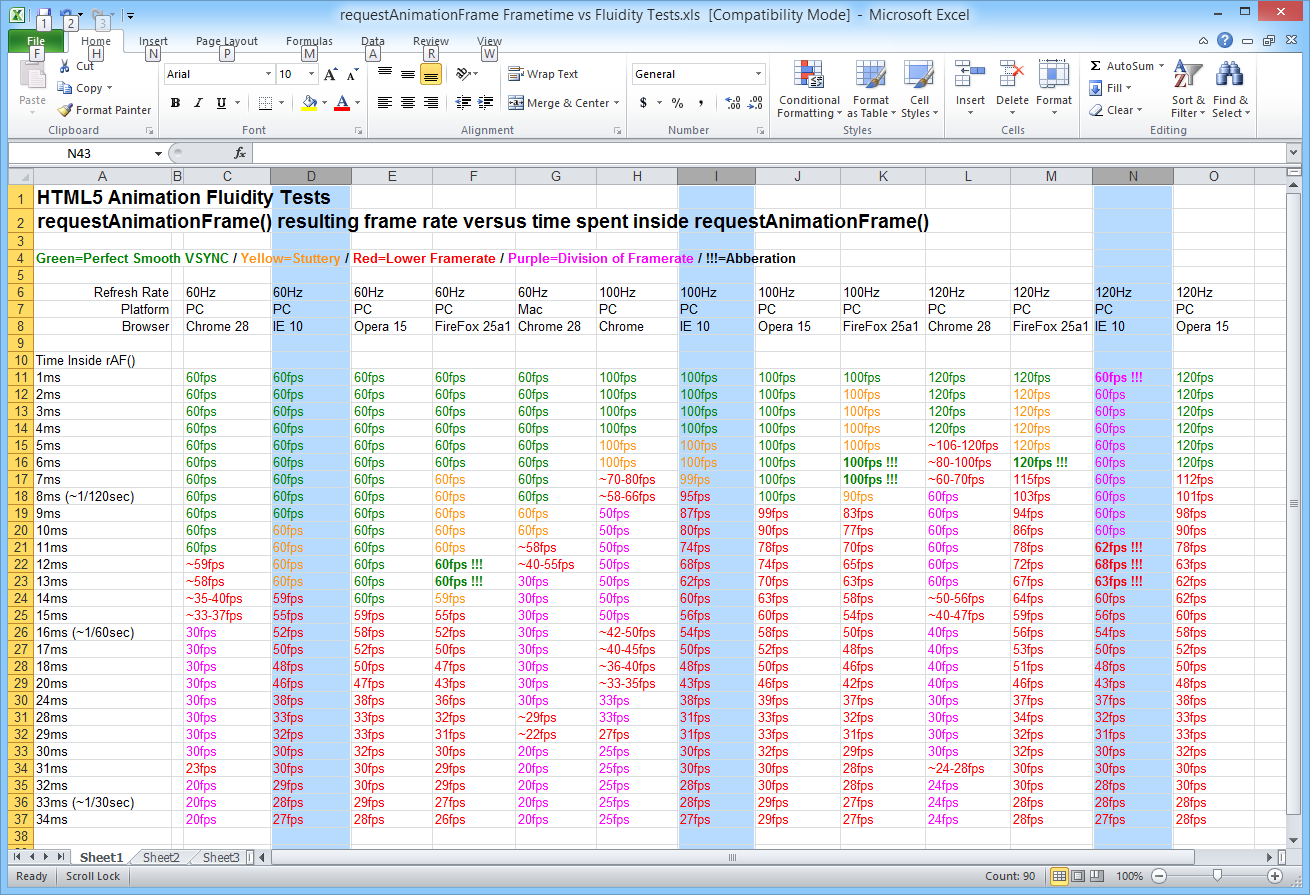 I created github #375 and #785 on W3C’s HTML bug tracking system. After several collaborations, I was invited to apply to become an Invited Expert at W3C Web Platform Working Group.

I have also collaborated with Duckware who owns www.vsynctester.com, who have also discovered flaws with VSYNC-related support in web browsers.

As Invited Expert status, this gives Chief Blur Buster the ability to directly submit edits to HTML 5.2 (in this specific sphere of expertise) for W3C peer review to the HTML 5.2 standard after appropriate consultations.

Why Is This Important?

There is little in web browser standards to accomodate “Better Than 60Hz” monitors, which leads to very inconsistent behaviours between different web browsers.

However, in the last few years, this topic has become extremely important, and harder to ignore:

Most software developers are not familiar with the existence of high-refresh-rate displays, nor are aware of special considerations (eSports, scientific motion tests, etc).

Nor are most writers of industry standards, either.

I found myself in the unusual position of simultaneously having:
(A) industry standards writing experience.
(C) software developer experience; and
(D) expert in displays and monitors — including a peer reviewed paper.

Being one of the few such individuals in the world to simultaneously meet all the above, someone at W3C asked me to apply for Invited Expert status, and my application got accepted.

This streamlines my ability to submit changes to HTML 5.2 for W3C peer review. As the year progresses, I’d like to open a public discussion about further improvements to the HTML standard.

With the need for a stronger VSYNC to synchronize animations to the display’s refresh rate.

This is also called “VSYNC OFF”. More than 80% of users in the now-$1-billion-dollar eSports gaming industry use “VSYNC OFF” because it reduces input lag. Scientific applications also sometimes require this for low-latency tests. Photodiode oscilloscope measurements show that 1000fps @ 60Hz has at ~8ms less input latency than 60fps @ 60Hz. (Almost half a frame-time less lag, because waiting-on-vsync can force a frame to be delayed). In some cases, lag can spike to a full frametime less lag, e.g. 16ms less input lag. Chrome already supports this via a command line option “–disable-gpu-vsync” but is not enabled via JavaScript API

At least during full screen there needs to be a path of future support of optional JavaScript-controlled decoupling of updatesrates from fixed frequencies to allow useragent apps to support emerging variable refresh rate display technologies (e.g. VESA Adaptive-Sync, FreeSync, G-SYNC, HDMI 2.1 VRR, etc) for Canvas2D/WebGL/etc. Instead of apps waiting for VSYNC, the monitor immediately refreshes upon completed frame. If you’re running at 47fps the monitor is essentially 47Hz. Refresh rate changes to match framerate! It allows stutterless transitions between framerates (simulated animation via interpolation). In fact, Microsoft XBox Scorpio (the one after XBox One) is planned to support variable refresh rates.

In full screen mode (not windowed mode, or “fullscreen borderless windowed mode”) it is possible for applications of multiple platforms to bypass WDM compositing and decrease input lag by another full frame. Windows 10 Creator’s Update also have a low-lag Game Mode which may be taken advantage of, for reduced latency between browser and display.

HTML API for Discovery Of Above

Even today, there’s no reliable way to detect the refresh rate of a monitor in a web browser (except with clever rAF() heuristics in Chrome, FireFox, Opera and Safari). There needs to be JavaScript ability to easily query for refresh rate, VSYNC ON/OFF support, variable refresh rate support, and low-lag full screen mode (bypass WDM compositing).

Historically, end of section 5 of W3C timing standard — https://www.w3.org/TR/animation-timing/ — recommends synchronization to refresh rate (VSYNC) — and work on #785 has fixed some shortcomings of the wording in HTML 5.2. This is great for many applications, but not all.

Competition gamers/eSports like using “VSYNC OFF” in full screen video games. The ability to do a W3C compliant HTML 5.2 Javascript API equivalent of turning on/off “–disable-gpu-vsync” would be highly favoured by full-screen WebGL game developers, to bring browser latencies (buttons-to-pixels) down. Ideally, this should be made possible in both canvas2D and with WebGL.

Many displays support other refresh rates, such as 75Hz. Also, there are many displays other than 60Hz, including gaming displays (120Hz, 144Hz). And VR displays such as Oculus and HTC Vive operate at 90Hz which Chrome supports (360 degree YouTube videos). Also, future TV standards (e.g. 8K 120Hz) may introduce 120Hz as a more standardized refresh rate in coming years.

It is extremely important to standardize how animations behave at refresh rates other than 60Hz, as synchronizing animations exactly to refresh rate is important, regardless of refresh rates. (Even 115fps @ 120Hz results in unsmooth motion), but also still provide an API to optionally decouple update rates from display refresh rate.

Modifications to a VSYNC API needs to solve the following, at least several or all of:

There are other APIs that may be needed, but this is the type of “update-rate and latency knowledge” that high-performance JavaScript applications need. This will be required for both WebGL and non-WebGL modes (e.g. HTML5 canvas).

As owner of Blur Busters, and mentioned before, I am now an Invited Expert in W3C Web Platform Working Group. I welcome gaming industry programmers / those in this industry to collaborate on this topic.

You can also collaborate on this bug-tracking entry for adding a HTML VSYNC API:
HTML 5.2 VSYNC API: Support for VSYNC OFF / 120Hz / variable refresh displays / etc

By collaborating here, you can help influence wording of the changes to the HTML 5.2 standard, necessary to introduce a VSYNC API.

I can also be directly reached at [email protected] for ideas, suggestions, and technical discussions. Alternatively, you can also follow up at github #375 if you are a github member. Or follow up in the Comments below.

A new issue has been submitted to WHATWG as of January 2020. While it may take time for broad standardization, more consistency such as requestAnimationFrame() need to be accelerated before the arrival of popular 120 Hz smartphones.