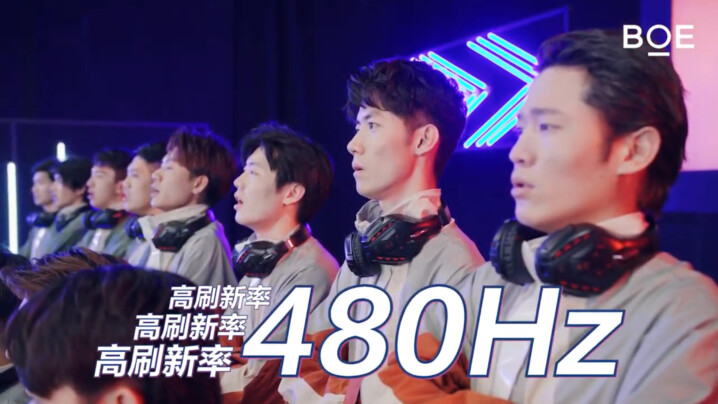 Most of our news audience don’t notice China until shocking surprises happens. But, according to BOE China’s Website, press release of 2021-06-30, they announced 480 Hz domestically in China far ahead of LG.

And began showing off their locally-developed 480 Hz display recently at ChinaJoy, a large technology convention that is currently ongoing in China today.

Incredibly, Chinese engineers over the pond are fast refresh rate learners. Currently, more TestUFO web traffic now comes from China than North America, and it is no wonder: esports is big in China now.

Unbeknownst to most news media outside of China, the recent 480 Hz reveals from LG and AUO apparently may have possibly been a fire originally lit by China;

We are also big fans of LG and AUO panels, and their contribution to “Fast IPS” technologies. Last week, most technology media recently announced the 480 Hz news by LG and AUO, including TomsHardware and Hexus.net.

However, unbeknownst to many of us, BOE announced 480 Hz long before LG and AUO without western media noticing, except for a tiny mention on Newswire dated May 21st, 2021.

Unnoticed by North American and Europe media, BOE has already started showing off 480 Hz demonstration displays beginning a few months ago in China. Here is a YouTube video pitch:

BOE announced at DisplayWeek 2021 last May but most mainstream media was absent. But we noticed. However, because of the pandemic, DIsplayWeek 2021 was mainly an online exhibition.

In this earlier May 18th, 2021 tweet, the 480 Hz BOE panel is apparently already being demonstrated in public. 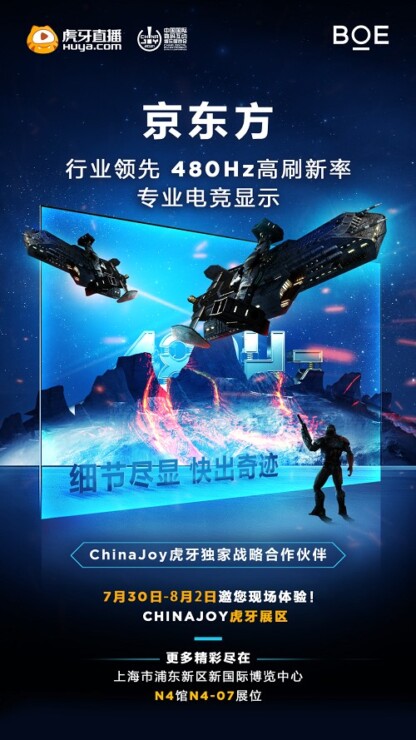 What Is BOE China? Who Are They?

Little known in the west, BOE Technology is a very large company in China with a staff of over 68000. They earn over $14 billion revenue per year (2018) and trade in the Shanghai stock market.

With the current complex trade situation, this company is astoundingly so little known in the United States, that their American Twitter account has a mere 49 followers. This is shockingly small for one of the world’s largest manufacturers of LCD, OLEDs and flexible displays. They don’t just rebadge panels; they actually manufacture their own panels!

We saw the writing on the wall in our CES 2018 Photo Journal of China 240 Hz Developments that China was catching up in the refresh rate race.

Blur Busters was already expecting China to catch up to refresh rate ingenuity. We tested a 480 Hz  experimental display created by ZisWorks in year 2017, though only at low resolution.

We Must Watch Developments Carefully: Other BOE Innovations

We improve our Google-Fu to include Baidu-Fu by including baidu.com searches (text and images) in research to make sure we are not left behind by the incredible display developments in China.

BOE has been outputting some jaw dropping displays, including a 32:9 ultrawide gaming OLED too: 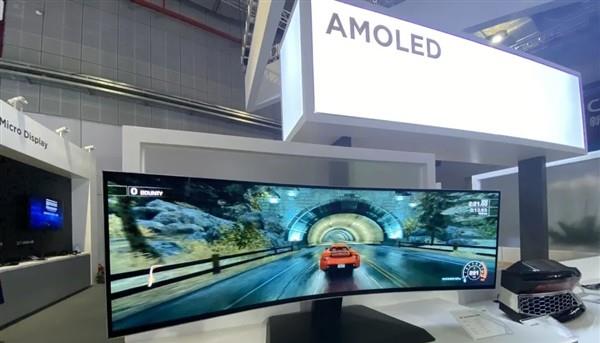 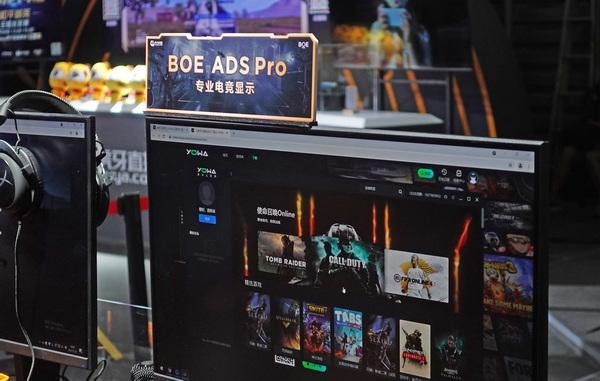 Rest of World Needs To Catch Up on Refresh Rate Commoditization 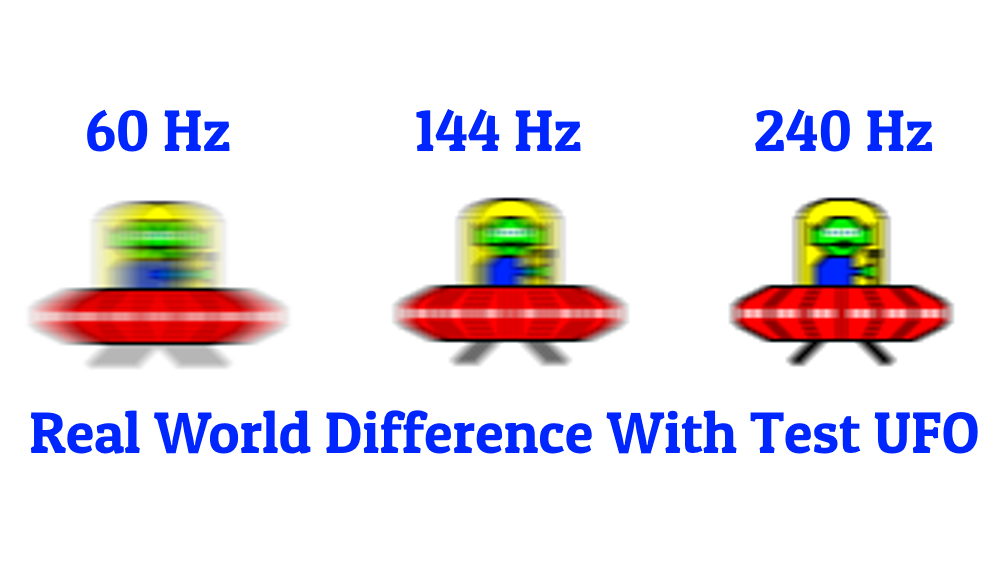 Users of 240 Hz esports displays notice that even everyday Windows use (browser scrolling, map panning) has one-quarter the motion blur of 60 Hz. We have noticed there are long-term plans to commoditize 240 Hz by the 2030s.

The common Blur Busters recommendation is geometrically upgrading your refresh rate by at least 2x to 3x for most mainstream users (e.g. 60 ➔ 120 ➔ 240 ➔ 480 Hz) in order to remain human-visible in the diminishing curve of returns.

While LCD GtG pixel response is speeding up, it is still a bottleneck, this requires many mainstream non-gamers to upgrade refresh rates by 2.5x to 3x to notice a difference (e.g. 60 ➔ 144 ➔ 360 Hz).

However, this is not the rule of thumb for casual gamers or non-gamers for real world apps (like scrolling, dragging, and panning) in the light of finite pixel response speed. Most average users easily see a difference between 60Hz versus 480Hz, while it’s harder to see 60Hz vs 144Hz, or 144Hz versus 240Hz.

Even 1000 Hz will come by the end of this decade, and that too will even be commoditized within a few decades. At first, 1000 Hz will be a highly premium refresh rate in the first 1000 Hz displays.

At CES 2020, ASUS revealed to PC Magazine, Blur Busters and others about their “road to 1000Hz” [PC Magazine] within the span of this decade, and Blur Busters has already witnessed multiple 1000+ Hz lab prototype displays.

Just as yesterday’s users not immediately noticing a difference between VHS and DVD, or forgetting to enable HD on their cable boxes, people get used to them. It is apparent that refresh rates are following a “mainstreaming anyway” journey.

Video resolution increases started a few decades ago beginning with the 1980s Japan MUSE HD system to today’s 4K and 8K televisions and retina smartphones. Even 1000 Hz will someday be mainstreamed this century.

Unlike yesterday’s “Fake Hz” from television interpolation or temporal dithering, these are true genuine refresh cycles, ever since the first 120 Hz monitors (Samsung 2233RZ & ASUS VG236H) from year 2009. 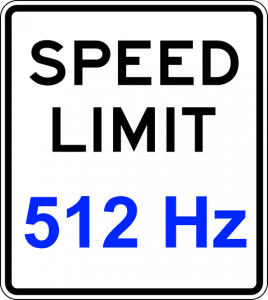 In fact, the current Window Insider builds have an undocumented registry tweak to unlock the Windows 500 Hz refresh rate limit, for innovation to enable 1000 Hz in Windows 10 and 11, thanks in part to Blur Busters advocacy. This registry tweak is currently being used by researchers and manufacturers for R&D.

Is this the Blur Busters equivalent of Soviet Union catching America by surprise with their 1957 Sputnik launch?

It is highly likely that China will be first to 1000 Hz refresh rates. We must all keep up!