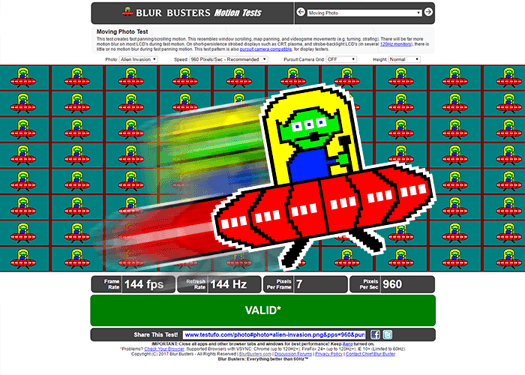 The Test UFO Motion Tests at TestUFO.com is the world’s most popular display motion test, created by Blur Busters founder Mark Rejhon. It is frequently used to test monitors and other screens.

What’s very special about TestUFO? It uses a default motion speed of 960 pixels per second.

There was a need for a motion speed divisible by futuristic refresh rates long before they came on the market. TestUFO launched in 2013, well before the first 240Hz monitors and the 480Hz experimental display! We wanted to use something that easily compares math to pictures, and pictures to math.
1ms translates to 1 pixel per 1000 pixels/second — the simplified Blur Busters Law formula.

960 Pixels/Sec Is Faster Than Many Outdated TV Benchmarks 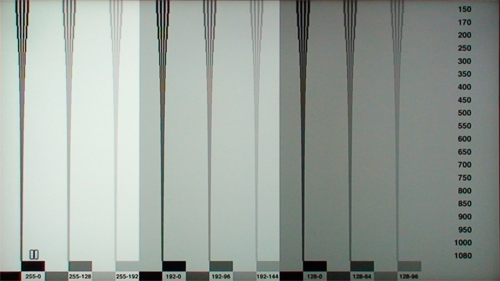 To avoid this outdated test, TestUFO needed to come up with universal motion benchmarking that stayed consistent regardless of motion speed in the retina resolution race (4K, 8K+) and retina refresh rate race (120Hz, 240Hz+).

Old benchmarks for televisions used very slow scrolling test patterns. Sports & gaming use faster motion than these benchmarks. Motion in esports competitive games such as Fortnite, Counterstrike: GO, and other games can go thousands of pixels per second, creating a massive amount of display motion blur.

960 Pixels/Sec Is Not Too Fast To Eye-Track

The speed of 960 pixels per second means an object takes 2 seconds to cross a 1920×1080 display. We needed a fast motion speed that was still possible to eye-track. We are very familiar with eye-tracking motion blur which is an important component of the science of display motion blur,

960 Pixels/Sec Is Easy To Double And Quadruple

Our UFO Trademark Is A Deliberate Test Pattern Easter Egg!

Did you know that our Blur Busters UFO logo was intentionally designed as a test pattern?

Here is a handy comparison chart of motion blur at 960 pixels per second, used in many of our articles such as 60Hz vs 120Hz vs ULMB, as well as Amazing Journey To Future 1000Hz Monitors.

Note: These images assumes insignificant GtG pixel response that is only a tiny percentage of a refresh cycle. See Pixel Response FAQ: GtG versus MPRT for more information how pixel response can degrade motion blur further.

We understand display manufacturers have to use photodiode oscilloscopes and other complex measuring equipment, and to use VESA measurement standards that accommodates noise margins. However, many people need something easy to explain in images and video as a bridge between familiarity (looking at pictures) and what researchers and scientists do (using measuring equipment).

1ms of persistence = 1 pixel of motion blur per 1000 pixels/second.

Test UFO Motion Tests paved the industry standard display motion speed. Many researchers, companies, reviewers now use variants of this motion speed, thanks to TestUFO being used by millions of visitors worldwide.

The industry has now utilized multiples of 960 pixels/second as the standardized motion speed, whether they use TestUFO or their internal test — including RTINGS, NVIDIA, and many dozens others!