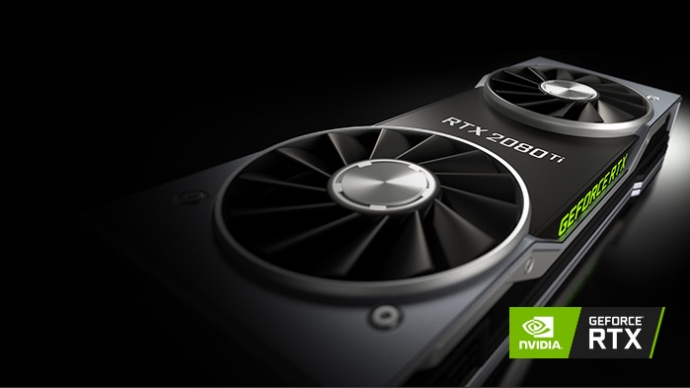 Finally, a successor to Pascal has arrived, codenamed Turing, after the famous mathematician who cracked the enigma code during WWII, helping the allies win the war.

Unless you’ve been living under a rock these past few days, you’ve likely already heard about NVidia’s new GeForce RTX 2070 / 2080 / 2080 Ti consumer-oriented cards.

NVidia has abandoned the GTX moniker in favour of RTX that refers to “ray tracing”, which the holy grail of computer graphics.

Despite having ray tracing performance reportedly six times higher than Pascal and offering up to 10 giga-rays per second, a skeptical reader will note that achieving real-time ray tracing for global illumination (GI) is still going to be a challenge given the amount of rays (much more than 10 billion / sec) required to converge to a smooth image in any radiometrically complex scene (e.g. lots of lights, reflections, smoke, translucence, etc). Here’s an example of what to expect in RTX-enabled games:

This is where machine learning (ML) de-noising comes in, which these cards also support. Several real-time ray tracing demos were shown off at Siggraph 2018 in Vancouver, Canada, proving that RTX indeed delivers the goods, with integration into Unreal and Unity already complete.

Cards from MSI, Asus, Gigabyte, Zotac, PNY, and EVGA (a complete list here) are all set to be released on September 20th, so get your pre-orders on, unless you are willing to wait for the inevitable stock shortages to subside.

NVlink replaces the old SLI bridge connector, and interestingly enough on the Quadro cards at least, actually doubles the amount of usable framebuffer memory when you use two cards, as opposed to current SLI scheme where the extra memory is simply redundant. TBD if consumer cards allow this too.

NVIDIA also added a new dedicated VR connector called VirtualLink, although I must say I’m personally much more interested in wireless VR than remaining tethered to my PC, especially for roomscale action games like Beat Saber or Skyrim VR. Still, higher resolution VR headsets are thirsty for all the bandwidth they can get so wireless modules are likely going to be out of the question for many cases.

So it is indeed a great time to be a gamer and an even better time to be NVIDIA, if you follow news of their record-breaking profits.

Even simply providing better reflections (from offscreen objects) will deliver an immediate WOW impact that traditional rasterization cannot provide, as seen in this Battlefield V demo:

AMD certainly has their work cut out for them, given the 499$ USD retail price of the 2070 variants which are sure to be popular for years to come. I advise waiting for in-depth reviews instead of pre-ordering, since there are some variations between vendors in terms of cooling. The ASUS Turbo variant, for example, appears to have inferior cooling to the reference NVIDIA design, which is rather odd, so I would avoid that model unless space was a factor.

Another noteworthy feature on these cards is the inclusion of DSC (digital stream compression) for the DisplayPort 1.4a ports. This adds support for 4K 144hz in HDR10, and 8K60hz, both in 4:4:4 using a visually lossless 3:1 compression mode, extending the current 32.6 gbps bandwidth limit of DP 1.3 / 1.4 /w HBR 3.

This might seem academic at first until you read reviews of ASUS’ latest 4K 144hz G-Sync monitor which doesn’t support DSC, and requires the use of 4:2:2 chroma subsampling to enable HDR10 at 144hz. To many, the loss of sharp text is simply unacceptable, so this means in practice the monitor is limited to 98hz with HDR activated. This is more a limitation of the monitor but something to keep in mind when buying expensive GPUs to power them.

2018 is shaping up to be a great year for graphical eye candy, and NVIDIA is spoiling us here with their hard work. Congrats to all involved. Assuming real-time raytracing performance is as claimed, the RTX is perhaps, without hyperbole, the single most exciting new GPU release since the original 3Dfx Voodoo Graphics (in 1996) and blew everyone’s mind.

Real-time ray tracing at these prices is truly a tectonic shift in the industry and the start of a new wave of spectacular realism.