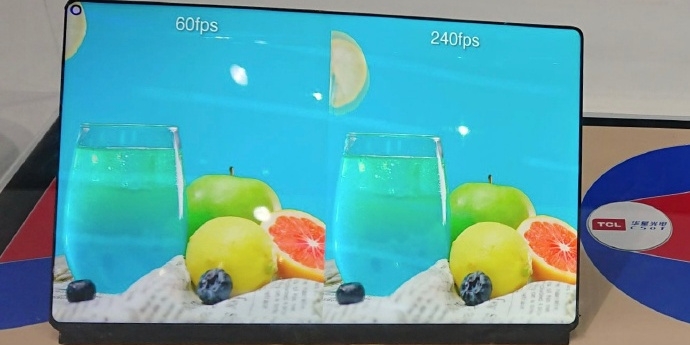 It appears that TCL has been working on a new gaming tablet known as the WQ Gaming Tablet that is set to feature a 240 Hz refresh rate with a 2ms GtG response time.

In a leaked listing on Weibo, the TCL WQ is revealed to have a 10.8-inch 2560×1600 resolution with a punch-hole display. Seemingly, tablets are looking to follow in the footsteps of smartphones with the punch-hole, but the Huawei MatePad Pro tablet will be the first tablet to have a similar punch-hole we believe is just for a front-facing camera.

The TCL WQ is, however, the first tablet to sport such a high refresh rate, and along with it 280 PPI and 500nits of brightness.

A special addendum below, written by Chief Blur Buster, Mark Rejhon, adds some additional information below about the benefits of 240 Hz on mobile devices.

Blur Busters has reported on the 240 Hz mobile screen, including an OLED, but this is a real 240 Hz refresh rate. However, some websites such as NotebookCheck claims that 240 Hz would not be worth it for mobile devices.

LCD 240 Hz has one-quarter the motion blur during web-browser scrolling of 60 Hz, so it makes things a lot more enjoyable.

The mainstream media used to claim that retina screens were not worth it on mobile devices. Retina screens and 4K screens used to be incredibly expensive and power-consuming. Nowadays, retina screens are even found on low-end Android phones. We expect high-Hz screens to follow a similar commodification path over the coming years / decades, due to visible human benefits..

Provided the extra Hz is free (like retina resolution), and doesn’t cost noticeable extra power, it’s still quite noticeable for things like browser scrolling and other stuff.

Let’s remember the former mainstream media claims that retina resolutions was not worth it for mobiles. We view this as “famous last words” — and the same applies to retina refresh rates.

Moore’s Law of refresh rates is that refresh rates approximately double every 5-10 years, and this will continue through the 21st century especially as it becomes low cost / free / included, much like retina-ization of mobile screens.

In ten years, if the extra cost of high-Hz is eventually almost free (no extra cost, no extra power consumption) — and it has human visible benefit (which it does) — then it will eventually be commoditized.  4K screen used to cost well over $10,000. Now it’s standard even in cheap television sets. Same thing also happened to retina displays and 3D accelerators. Now even a low-end smartwatch has a GPU built in. And even a low-end Android smartphone has a Retina screen built-in. Eventually, high-Hz will be a standard inclusion, since retina refresh rates has human visible benefits.

There are many new 90 Hz smartphones now. One problem is the jump from 60Hz to 90Hz is only 1.5x improvement in motion clarity. 90 Hz reduces scrolling motion blur only by a third. That’s pretty pitiful on a small screen.

However, increasing 60Hz to 240Hz on a small smartphone, if it can be done at zero additional cost (battery wise, power wise, cost wise), 240 Hz reduces scrolling motion blur by a whopping 75%. This bigger begins to be more noticeable on small screens for things like browser scrolling.

This assumes that GtG is not a bottleneck. The above image assumes GtG is a tiny percentage of a refresh cycle on a sample-and-hold screen, including OLED and LCD.

It’s great to know that on the TCL display, that GtG is less than half a refresh cycle. However, ideally GtG needs to be less than 1/4 refresh cycle to be below the human-visibility noise floor.  GtG that is more than 50% of a refresh cycle begins to become human visible (even at high Hz) in the form of ghosting issues and corona issues, such as asymmetric motion blur effects. The ghosting/coronas interferes with the clarity afforded by a high Hz screen. We have found that even 1ms creates human-visible blur differences (i.e. 3 extra pixel motion blur at 3000 pixels/second scrolling in TestUFO motion tests).

The way things work with flickerless displays (sample-and-hold, non-CRT) is that you need double Hz in order to halve scrolling motion blur.

That’s why a lot of us are big fans of high-Hz screens as ergonomic screens (eliminating motion blur without using flicker techniques), even for non-gaming contexts too.  This is why display researchers and scientists found that 1000 Hz displays are still a worthwhile humankind journey.  While humans don’t see high frequencies directly, there are other indirect benefits such reduced motion blur and as reducing stroboscopic effects.

That’s why the 120Hz iPads exist as well — and 240Hz is yet another step up for mobile devices.