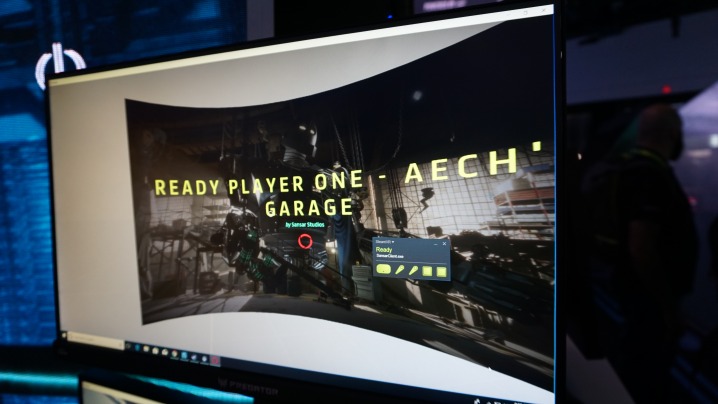 At CES 2018, I walked up to Intel’s booth, asking to try their virtual reality. To my surprise, they had the HTC VIVE PRO prototype headset with much higher resolution than VIVE.

They were both playing the same demos, so I tried both the VIVE and VIVE PRO, one after the other, giving me an excellent opportunity to compare the two, right on the spot!

Demos on both included the Ready Player One: Aech’s Garage and the Intel Convention Booth Demo (A virtual clone of the physical Intel showroom floor). 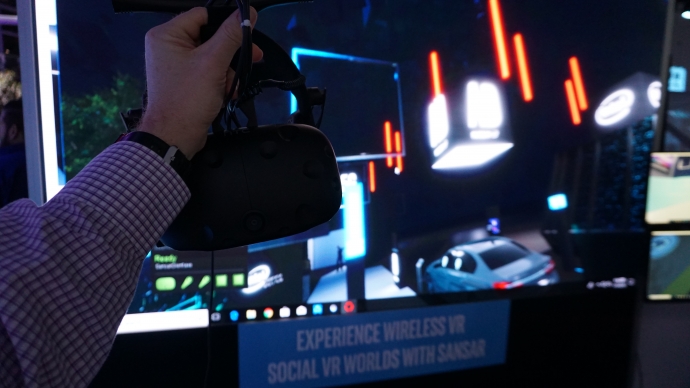 I briefly took a scenic stroll through the stunning visuals of Ready Player One, though since I had limited time, I compared the Booth Demo on both headsets.

First, I tried the VIVE original, the one currently available for retail. Readers normally into gaming monitors, but new to VR, this is the VR kit where you can physically walk around in your room (while in VR) before being presented with a trek Holodeck-like grid representing the boundaries of your walkspace. So you don’t bump into walls or furniture.

With VIVE, I was greeted with the familar 2160×1200 OLED running at 90Hz strobed low-persistence. This is the same OLED used in the Oculus Rift.

What made this experience special is that the VIVE was completely wireless. Untethered, with no cables to tangle my neck or feet. With a battery and the Intel WiGig standard, I could freely roam as long as I was nearby the powerful gaming rig. 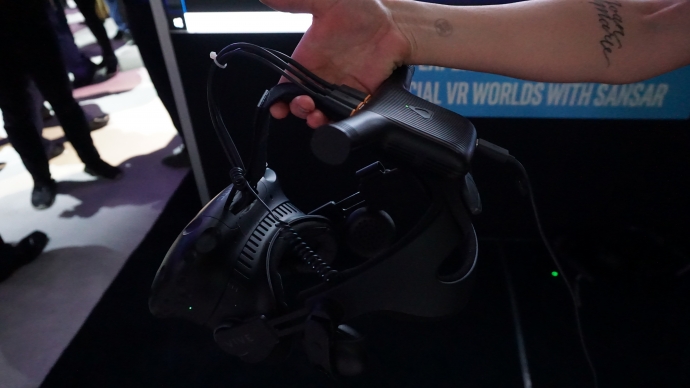 The antennas, which looks like horns on top of the VR headset, use 60 GHz wireless.

I had a roam around Intel’s virtual reality demo, which was perceptually lagless in my head-turning without nausea for me. I felt like I was teleported to a different world, different from reality. Perfectly stutterless, and motion without motion blur!

Once I was done, I immediately switched to the VIVE PRO headset, with an OLED running at 2880×1600, a 78% increase in resolution.

It also had excellent low persistence, nearly blur-free head-turning (as much as the territory of 1ms-to-2ms persistence would allow) while also being nearly twice the resolution.

Being a more demanding VR heaset running at 2880×1600, the framerate almost always managed to keep up. There were no noticed stutters in Intel’s showroom demo but Ready Player One: Aceh’s Garage will benefit from going 1080 Ti SLI or Titan SLI to remove the stutters and play a full 90fps at 90Hz at 2880×1600.

For either VIVE headsets, I forgot I was wearing something on my head, with its comfortably padded straps and adjustments. As a result, I could see myself easily wearing the VIVE or VIVE PRO for hours without getting my neck tired — as long as the game avoided excessive motions inducing VR nausea. 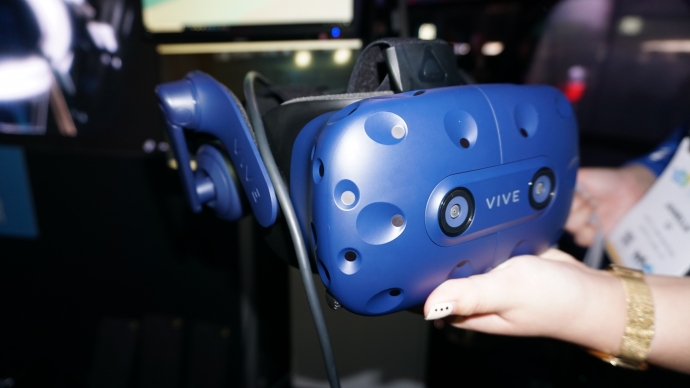 The contrast ratio and color gamut of OLEDs are extremely good, which improves the feeling of immersiveness, with full blacks, good for starry space and night scenes.

For the performance required of the resolution bump, we’re looking forward to more powerful NVIDIA Volta GPUs to the rescue. I anticipate new graphics cards will arrive by the time HTC VIVE PRO hits the markets.

The VIVE PRO also has cameras on the front of it, which allows the headset to be used for augumented reality. It is also wonderful during pausing games, to briefly see the real world to be able to grab your cup of coffee, before resuming your VR game!